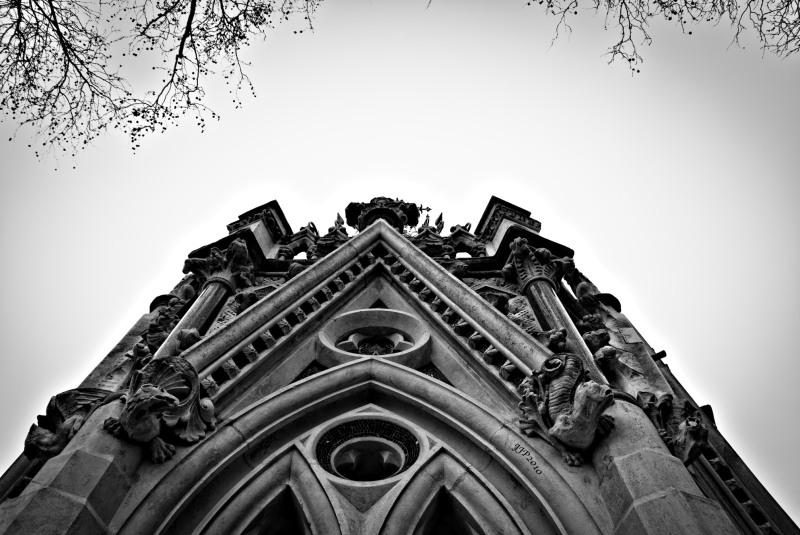 Another shot from my photo walk in London, this is the Buxton Memorial,
The Buxton Memorial Fountain is a memorial in London, the United Kingdom, that commemorates the emancipation of slaves in the British Empire in 1834 ( from Wikipedia http://en.wikipedia.org/wiki/Buxton_Memorial_Fountain)

Looks like a snowy day ahead today, according to the news up to a foot of snow of the city, kind of hoping for a snow day LOL

Perfect. either compound and or processed.
Warm greetings

Beautiful angle! I love it!!

Nice viewpoint. Brings out the Gothic in the architecture

Excellent angle, and love the processing :)

your perspective is wonderful

A great perspectiv to the sky with superb details !

Good POV, I took a similar shot of St Albans abbey a while back. I like that the trees are overhanging in the top of the frame, gives us a sense of where we're standing.

I hope you get your snow day :)

Love the point of view and the good b&w. Really nice picture for me.

I love the details of this & the angle is quite nice!

A great framing in this beautiful B&W

I like the composition. The branches give it a nice balance.

Snow??? Wazdat?! :) They were not much ahead of the US in the emancipation thing, were they? Of course the slave trade issue (Amazing Grace and all that, came a bit earlier).

Good evening, JJ
A few years ago I visited London and visited some sights.
The reproduction is superb. Wonderful evening for you and thank you for your comment.
Sincerely, Christel

One of the few things I miss about up north....Snow Days!!! much better than we get hurricane days....too much damage then.....
love what you did on this shot...tone and contrast are awesome!!

I love the point of view!! great B/W!

Superb PoV. Like the structure almost touching the sky.

Quite a structure. Definitely carved in stone:-)

Now this shot of the memorial I really like! Looks so much better in black and white and way close up love the detail that you can see without the bright colours distracting you

The lighting is excellent!