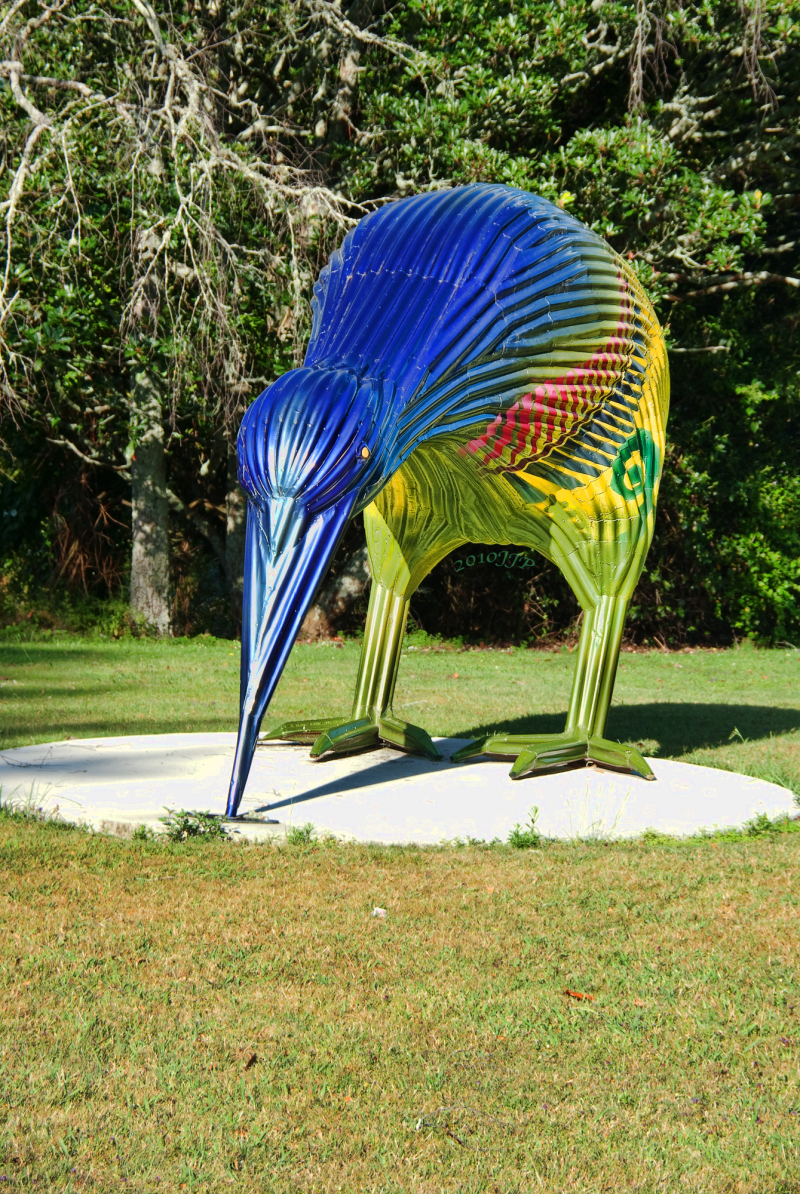 Now we are on to NZ, my home country and this is a Kiwi Art Piece made out of Corrugated Iron in Otorohanga in the North Island and where we stopped for our first night there

Kiwi Fruit on the other hand ,

The kiwifruit, is the edible berry of a cultivar group of the woody vine Actinidia deliciosa and hybrids between this and other species in the genus Actinidia. The Actinidia is native to North East Asia, particularly South China.

Also known as the Chinese gooseberry,[1] the fruit was renamed for export marketing reasons in the 1950s; briefly to melonette, and then by New Zealand exporters to kiwifruit. This latter name comes from the kiwi — a brown flightless bird and New Zealand's national symbol, and also a colloquial name for the New Zealand people.

As it is grown in a few other countries now and marketed as KiwiFruit or just Kiwi, a New Zealand group of growers now market it as Zespri which they have copyright unlike the name Kiwifruit, so if your in the market and see KiwiFruit with a label saying Zespri you know it came from New Zealand

Wow! An hommage to the kiwi, fantastic scupture and a photo very well done. I like very much these colors.

What a superb use for corrugated iron! I've only ever seen it used for roofing here; always rusty! It looks huge; any clue to its height?

Wow! That is a nice sculpture ! Great colorful work of art !

very special capture from a beatiful statue and thanks for the intresting info about Kiwi!

Lovely artwork ! The colors are beautiful !

A wonderfully electric coloured Kiwi and great use of corrugated iron. Thanks for the explanation, it will save a lot of confusion in the future :)

What a strange bird. Its colors are great

SOUL AFLAME from The bosom of Mother Nature, United Kingdom

I've gone all these years without realizing the difference.... ha ha
A great shot of this super sculpture.

A fine shot of this "famous" bird of this land. I like the fruit, gut have never seen the bird. Nice shot.

ahhah impressive! it makes me smile and get a bit scared at the same time

Such an interesting work of Art... an iron Kiwi, wonderfully captured. This bird I've never seen... but I love the fruits, they are so delicious.

What a cool sculpture:) Great shot .

This is a great and, for us, original piece of street art. I thank for your explanation. Really interesting.

Now that is just plain weird, but I like it!

That is beautiful. If it was around here it would probably be decorated with graffiti.

Thanks for the image and the lesson. Count me a big fan of both bird and sweet treat!

Nice shot !
I didn't know you were from New-Zealand... I dream of visiting it some day !

Good evening, JJ,
The colors are brilliant. This sculpture is very huge and interesting. The explanatory words about it, I read with great interest. I like kiwi fruit. They contain many vitamins. Beautiful Sunday evening and thank you for your nice comment. Dear greetings Christel and 5 stars *****

It is after such a long time I have seen something that looks like kiwi. And strangely I still remembered the name. Probably because they have a shape which is not so easily forgotten.

Aha - I've now checked your profile and you are a Kiwi. Kia Ora Mate. I love these corrugated art pieces and this one is fantastic. :)

Great shot, great colours in this

Explaining the difference between Kiwi birds and Kiwi fruit made me grin. Kiwi bird, a brown fuzzy little fowl with green seedy innards that is fun to eat and mostly flightless? :D We were going to visit there last year but never made it. I do hope soon to have the privilege.

You have captured the Kiwi beautifully! I love the lighting and textures.

Wow! That is a nice sculpture ! Great colorful work of art !

Not too many Kiwi photobloggers. And not all of us blogging from NZ. Maybe we should all start tagging our pics of the NZ landscape and our NZ/kiwi-themed pics with NZ or kiwi. Your thoughts?

continuing on from the previous comment....I've been tagging mine with NZ