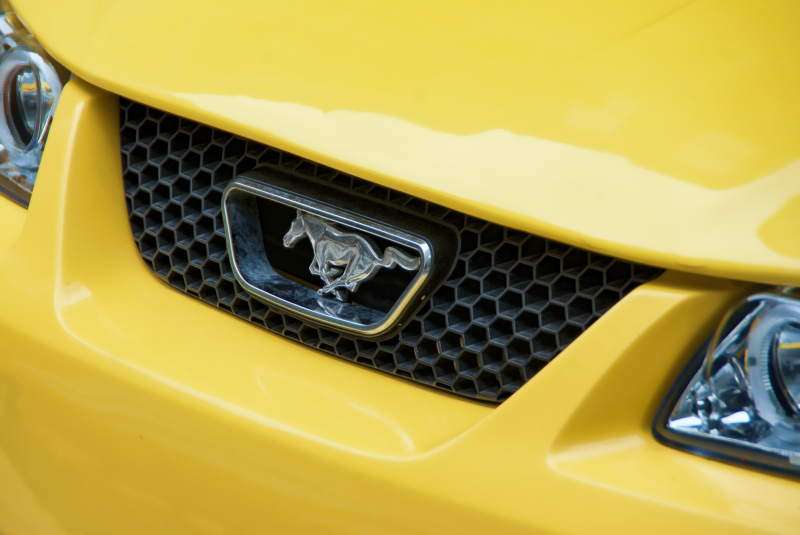 A close in shot of a mustang I saw recently, m=not going to rant about the oil spill or environment, will just say its good to slowly see changes happening such as less big gas guzzling cars on the road, and throw in another quote

This is a beautiful planet and not at all fragile. Earth can withstand significant volcanic eruptions, tectonic cataclysms, and ice ages. But this canny, intelligent, prolific, and extremely self-centered human creature had proven himself capable of more destruction of life than Mother Nature herself.... We've got to be stopped. ~Michael L. Fischer, Harper's, July 1990

The horse says it all. Yellow mustang. WOW! Larry

That Mustang car sure became a hero for the auto industry, JJ....er, for Ford. I had just started college in the 60s when it first came on the scene and fell in love with it. It has been here in one form or another ever since. i like the crop of the famous icon.

Very interesting and a brilliant shot

Even if it is a big polluter, it is still splendid!! Good day.

You really captured the color quite well! I have seen these around here. Now if you can get a shot of that blue-green chevy camaro..... Sweet!!!!!!

I love the framing, nice yellow!

The Myth! Good detail and color.

Lovely close up of this timeless icon!! Great shot JJ!!

Everything a classic one, beautiful brilliant composition and that yellow. An image very hard.
Warm greetings

The MaJor from TM HooD, Iran

a mustang as a yellow special one....!!!:D:D great selection

Re your quote: we have to stop ourselves or we will bring about our own downfall. The planet will recover but we will be gone, destroyed by greed. In a sense I think it is appropriate that if this vile oil spill had to happen it should be in the waters of the country that is the largest consumer of the world's resources. Perhaps it can act as a positive wake up call to a realisation that we are living an unsustainable life style. There was a clip on the news about the companies involved in extracting oil in the Gulf. They were all practising the same lackadaisical attitude to safety in the pursuit of profit, BP just got unlucky. It should be remembered also that it is the world's, and in particular the US's insatiable demand for cheap energy and shareholder profits that drives this thoughtless/irresponsible/criminal exploitation of the planet. Government control and oversight has a role to play here and it is and has been conspicuously lacking not just in the Gulf but wherever oil (and probably a whole range of other raw materials) is being extracted.

@grouser: Thanks for the visit and I agree with what your saying, BP may be the one at fault in this case, but with our greed for oil all companies are taking unprecedented risks.
Its up to us all as individuals to do what we can to save the planet nd reduce our reliance of fossil fuels that the collection of put the planet at such risk

love the car - and the quote

Eventhough this car is known as a gas gussler (the newer ones not so much anymore)
I still love this car...a piece of american car-history...

well you can't go wrong with the car or the song for that matter...
wonderful close crop and the detail is perfect.. love the yellow..yellow isn't always the easiest color to come out just right..

Excellent words of Michael L. Fischer, Harper's, July 1990. How right he is! Thank you very much friend! The little Mustang horse is beautiful! A beautiful toy in the hands of a child. As this Zoey? I hope this better! Greetings! Adela

Great shot and thoughtful words to go along. We have all got to make this a better planet.

A beautiful close up of this famous logo on this bright yellow car.

All too true. Nice pov. However, the Mustang is an icon and I would love one! Especially a yellow one!

Good looking 'stang. the first web site I designed was for a man who rebuilt mustangs from the ground up. he wanted mustang sally playing on his site and he had it:-) cool shot.

Good evening, JJ,
It is a fantastic close-up. The details are very well expressed and are clearly in the color reproduction and brilliant. Mustang is a car for rich people. Thanks for the information. 5 Stars ***** Have a nice evening, and all the best. Sincerely Christel

Nice capture of the Mustang. I like that quotation.

This is a great car. Well detailed pic.

a classic car, okay a bit thirsty but hey we forgive it

Great shot! Before I scrolled down to your title I was thinking... Mustang Sally! lol! I like the composition and colours

That is a great colour for a car.

Pretty color for a pretty car!

Yeeeeeeesssssss! Really that's all one can say ;)