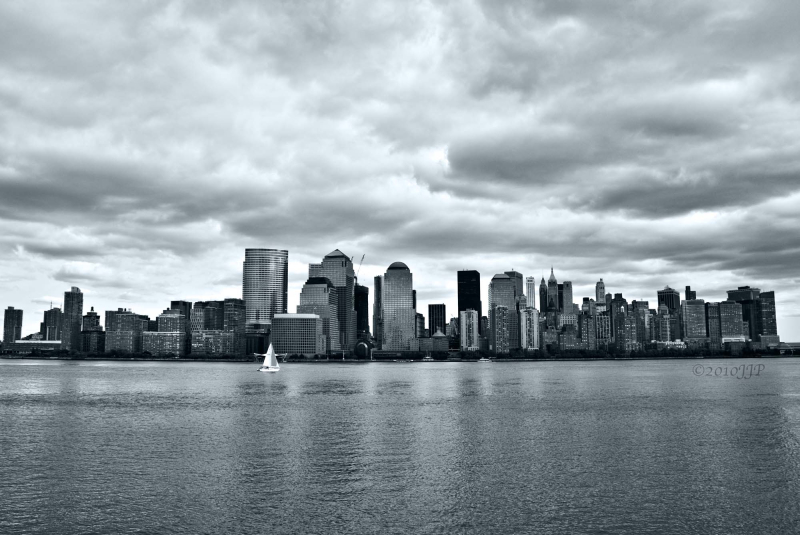 Clouds over the city

Went for a stroll around the Paulus Hook Part of Jersey City while the wife was getting some things done, was quite cool, but a nice relaxing stroll and took a few shots including this one, will try to find time to process some more tomorrow.

Couldnt decide whether i liked this version or the color one which I posted on Flickr here http://www.flickr.com/photos/tattoodjay/5152269453/

Wonderful image. I love it - as it is so great balanced, pure and so clean! LOVE !!!

looks good in b+w, i like the little boat dwarfed by the size of the buildings...

Excellent B & W shot, the atmosphere is made splendid. Good Sunday.

It's simply excellent! I like this BW and the composition is perfect: water, cityscape and sky. Nice one.
Have a nice day.

Stunning capture - beautiful sky; and processing it in b&w - fabulous!!

Looks really great in mono, not sure how I feel about the yacht interrupting my view.

If that view is a walk from your home, you are so lucky. A wonderful view, also
so changed from when I roamed the city. Beautiful capture.

This is a geat capture JJ. I love the B&W in this shot, perfect!!

Chris B from Olburgen, Netherlands

The MaJor from TM HooD, Iran

A gorgeous shot. The clouds and beautiful toning really make this one special.

i do like the dramatic clouds and the sailboat in the horizon adds extra touch to the shot!

The B 'n W is lovely, but the color version wins my vote! ;D

An awesome shot in B/W!

When you have a camera with you, you never get bored. And we're definitely not bored with this shot.

Stunning! I like how everything has a silver feel - except the white sail. Great shot!

I like this one in b/w for its shiny silverish-grey and the little sailboat is lovely too to the overall view...nice shot!